The fishing industry in Alaska is a diverse business encompassing everything from giant factory trawlers with crews of over 100 workers to small two-man gillnetting boats, and over 70 onshore processing plants with crews ranging in size from from 75 to 350. Overall the industry employs more than 65,000 people. 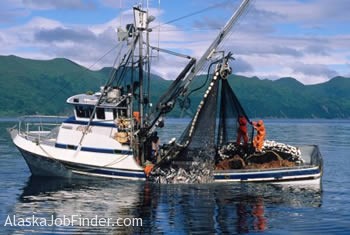 Employers in the offshore fishing industry include giant floating processors (which process but don’t catch fish) and tenders (which deliver fish to land and offshore processors). There are also a number of “factory” or catcher/processor vessels which both catch and process the fish at sea.

Additionally, there are three main types of salmon harvesting boats (purse seiners, gillnetters and trollers), pot boats (which catch crab and bottomfish) and longliners (which catch halibut, blackcod and other groundfish).

Alaska’s waters also harbor a thriving fleet of smaller trawler boats which catch groundfish but do not process them. These fishing boats employ anywhere from one to twenty crew members (plus processors if they process their own fish) depending on the fishery, the fishing method and sometimes the region.

In Focus: How Seafood Powers Alaska

Each of these are explained in full detail in the Member Services area. Want a seafood industry employment preview? Start learning the ropes right now. Here are overviews of the job opportunities in many of the core fisheries in Alaska:

Knowledge is king – we don’t recommend going to Alaska before learning what seafood jobs are REALLY LIKE. You’ll get the full inside scoop in our Members Section.

Use AlaskaJobFinder to help you find a great job in Alaska!

Have you thought about whether you want to work at sea or on land?

Alaska fishing industry jobs can be divided into two categories: harvesting and processing. Anyone seeking work in the industry must decide which of these to pursue. Processing occurs both at onshore plants and on boats, while harvesting is the actual process of catching fish.

The easiest way for a newcomer to break into the industry is on the processing end of things. Either at onshore plants or on floating vessels, processing companies hire countless entry-level workers to deal directly with the fish that have been caught. These positions include slimers, packers, cleanup crew members, machine operators, and office staff. Processing worker are usually paid an hourly wage with overtime and bonuses can make $1,200+ per week during peak season. Room and board and transportation (from the point of hire) is often provided for free or is greatly subsidized as long as you fulfill your contract term.

Harvesting or deckhand positions potentially can be even much more lucrative. Deckhands are usually paid a percentage of the boat’s catch, called a crew share. When a boat does well, the deckhands also do well and vise versa. Most of you have probably heard stories about the deckhands making $20,000 in less than a month. Although, many of these stories are true, they are not by any means typical. There are a lot of variable that affect how much you make. Another great thing about deckhand jobs is that you usually live and eat onboard the boat, which substantially reduces your living expenses. In the Members Section, we show you strategies to help you land a good position on a boat as well as ways to help you maximize your potential earnings. Net repair, wheel watching, net hauling, and rigging are just some of the responsibilities of harvest workers.

SUMMER JOBS– Most people who come up to Alaska to work in the summer will be working in the commercial or sport salmon fishing industries. Alaska’s summer salmon harvests are immense. Each summer, commercial fishermen catch between 150 and 200 million fish in a few months period. The first salmon runs start in mid-May (the prized Copper River salmon) and the last major runs end in early October. Peak seasons varies by region and usually ranges from mid-June to late August making it ideal work for college students.

FALL, WINTER, & SPRING JOBS – Autumn in Alaska means the end of the bustling salmon season and a shift to a variety of other fisheries throughout the state. In October, the largest king krab fishery opens. Working a Alaska king crab fishing job can be very lucrative, but it is also difficult to get these jobs without previous fishing experience. Numerous employment opportunities exist during this period in all three major sectors of the industry – onshore processing plants, offshore processing vessels, and harvesting vessels.

Factory trawlers harvest during most of the fall, winter, and spring months. In fact, the most lucrative time to work on a factory trawler is during the Pollock A season, which extends from late January often into April. Factory longliners also harvest halibut, blackcod and other groundfish between March 1 and November 1. The majority of crab are caught during the late fall and early winter months by both individual crabbing boats and the larger crab catcher/processors. During the fall and spring months hundreds of boats also fish for halibut, sablefish, and a variety of species of groundfish. In addition, the sac roe herring fishery also takes place during spring.

See our Alaska Commercial Fishing Calendar, for approximate start and stop dates of all the major fisheries.

Check out our Alaska Employment FAQ area to read about the answers to a number of typical questions regarding working in the fishing industry.