Due to Alaska’s healthy continental shelf, the Alaskan pollock fishery is thriving. It is the largest fishery in the entire United States and brings in billions of dollars each year. The North Pacific Fishery Management Council (NPFMC) closely monitors this fishery and sets the allowable biological catch and the total allowable catch to ensure that pollock populations remain healthy which is good news for those looking to get an Alaska pollock fishery job. 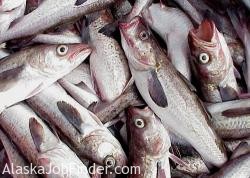 Alaska pollock are speckled colored and can grow up to 3.3 feet long. On average they live for 5 years, but some have lived for 17 years. Pollock reach sexual maturity between 3 and 4 years and they have an incredibly high reproductive potential – a female can produce over 2 million eggs in just a few weeks! (photo credit: Alaska Fisheries Science Center)

Enormous schools of pollock have frequented the Bering Sea and the Gulf of Alaska. They cruise anywhere from 330 to 985 feet (and sometimes even deeper) beneath the ocean’s surface, where they are relatively easy to catch using large cone-shaped nets. Pollock are fished commercially.

Use AlaskaJobFinder to help you find a great job in Alaska!

When Did You Last Eat Pollock?

Luckily, pollock have been abundant. Chances are you’ve eaten some recently…You may have tasted pollock in foods like fish sticks, fish sandwiches, or imitation crabmeat. Pollock is one of the largest sources of edible fish in the world. Plus, the Marine Stewardship Council declares the pollock fishery to be sustainable. Both humans and marine life rely on pollock as a food source, so close monitoring ensures sustainability.

Alaskan pollock will continue to be caught regularly and enjoyed worldwide as fillets, surimi, and roe. Typically the pollock fishery catches 2.9 billion pounds each season, which makes up 40% of the global whitefish. Often over 100,000 pounds can be caught at one time! And it is all done within 200-miles of the Alaskan coast. 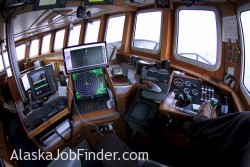 The Alaskan pollock fishery is a very cool fishery because pollock:

If you work on a factory trawler during the pollock fishery it will be an exciting adventure!

One way to catch a really good Alaskan pollock fishery season is to monitor stormy summers…3 years after a turbulent, storm-ridden summer the pollock harvest booms. (just a fish tale?)

If you think you’re ready to catch or process pollock, the Alaskan pollock fishery seasons ranges from January to October. They are closely regulated, so plan ahead and look for jobs now.