Companies exploring for oil and drilling in Alaska’s oil fields are continually advertising for workers.

Oil and Alaska go hand in hand. This is because oil and natural gases are some of Alaska’s biggest and most abundant resources. Oil plays a big role in how Alaska’s resources are handled because of the large impact oil has on world economies. Oil is such an important worldwide industry in fact that oil levels and resources fuel industry changes, drive markets, effect politics, provide money for governments and consistently maintains itself as one of the world’s leading and most important resources. 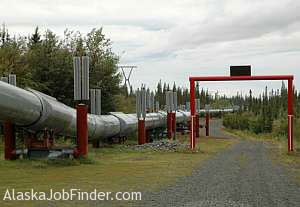 There is a lot of pressure to access Alaska’s oil reserves! The state provides 17% of the United States crude oil supply and supports close to 80% of government funding in Alaska.

Oil interests in Alaska peaked when in 1968 oil was found at Prudhoe Bay in the North Slope in northern Alaska. This discovery fueled a huge increase in Alaskan oil interests, where an extraordinary large amount of oil was found in abundance. A consortium of companies who were planning to process the oil all concluded that a pipeline running from northern Alaska into the lower 48 states represented the best way to move the oil so it could be easily accessed for processing and shipping. This decision marked the beginning of pipeline production and oil movement in this way from Alaska to the lower United States.

In the 1970s the Trans Alaska Pipeline System (TAPS) was built requiring over 70,000 workers for completion! The construction of this pipeline created thousands and thousands of jobs not only in regards to the construction of the pipeline but in research, maintenance, planning and other aspects the pipelines existence demanded from workers. This turned the oil into a huge job industry in Alaska providing employment where none existed before. Upon its completion in 1977, the pipe runs over 800 miles, 3 mountain ranges, close to 800 rivers or streams and has transported over 15 billion barrels of oil from Prudhoe Bay to the port of Valdez in its tenure.

While the majority of the jobs required for the construction of TAPS were construction related, The Alyeska Pipeline Company (the operator of TAPS) still employs close to 2,000 people. As you can see, the jobs created and maintained through the planning and construction of a pipeline in Alaska are many. While the production of jobs is mainly viewed as a positive result of the pipeline, oil has consistently been the source of much debate within Alaska and the lower United States. As a 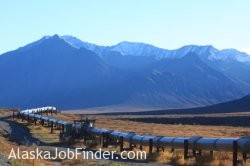 result thousands of jobs, a pipeline, a state economy, money, politics, access to oil and much more hangs in the balance and outcome of this debate.

The cornerstone of this debate was The Alaska Natural Gas Pipeline. This pipeline, when built, may run from the large oil reserves in Prudhoe Bay Alaska, through Canada, into the lower 48 states where it can be easily accessed by truck lines for movement. The project represents one of the largest construction projects ever undergone and means thousands of jobs in terms of construction, research, engineering and so forth are now available to workers. Jobs will go to thousands of Alaskans and Canadians as well as people currently living in the Lower-48. An estimated 9,000 jobs will be filled once the work gets going.

For more information on the pipeline, see our page on exclusive information regarding the Alaska Natural Gas Pipeline including history and job information.

After the approval of the pipeline, jobs have begun to pop up for workers who are required for the initial stages of the project. Thus, even now, jobs are available in the research and production aspect of the pipeline. With such large interest in the pipeline oil futures in Alaska will remain a focus for years to come. As such planners, researchers, engineers, site workers and thousands of others are needed in order to assess the work that will be required as work on the pipeline progresses as well as jobs that are required within the industry everyday. Even as offshore drilling aspects of Alaskan oil come into focus the possibility of more and more oil jobs in Alaska increases.

How to Find Oil & Gas Jobs in Alaska

Keep an eye on our JobCenter for many of these job openings.

An understanding of the oil industry, how it works, the jobs that are available, jobs that cross over within other related industries, jobs that 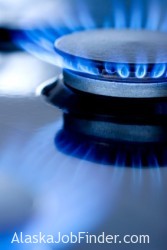 will be needed for future phases of the pipeline project, the training involved to acquire jobs, information on Alaska itself, the regions of the country work will be needed in, pay and hundreds of other aspects of work within the Alaskan oil industry are essential to your success in procuring a job.